Children’s author Alan Garner and his wife Griselda have lived at Toad Hall, a medieval house in Cheshire, for over fifty years. Together, they have saved it from decay and dereliction and restored it to its former glory with very little modernisations. They have been shortlisted for an Angel Award by Historic England for their outstanding contribution to heritage in the UK.

I have lived here for over fifty years, but Alan has been here for nearly sixty.

In 1957 he was looking for a place of his own. It had to be somewhere isolated, landlocked.  He needed a place where he could discover whether he was a writer.  His family have lived on the same square mile of Alderley, in Cheshire, since at least 1592. He wanted to stay close to those roots, so he limited his search to a five mile radius of his parents’ home.

He was two miles outside his limit when he saw this:

A torn piece of hardboard was lodged in the hedge. On it was daubed in whitewash: 17th. CENTURY COTTAGE FOR SALE. I pushed my bicycle down the overgrown path, across the brook and up the field.

The line of the roof appeared and, with each step, the house stood up from the land. This was no seventeenth century cottage. t was  a timber-frame medieval hall that had been divided into two cottages. One was for sale. I lifted the doorknocker at 7.20. p.m. on 19th. April 1957. Good Friday.

“And what’s up with you, then?” said my father.

“I’ve seen the only place I can live.”

My father pursed his lips.  “That’s a way. Is it for renting?”

“How much have you got?”

My father put on his cap and left.  He was back within the hour.

He then revealed that since my birth he had been paying a penny a week for me to be a member of The Independent Order of Oddfellows.  And he knew that the local Lodge Secretary would be propping up the bar at the Union Club.  As my father told it, the conversation went as follows.

Alan was 21 with a 100% mortgage, and no prospects; owner of an acre of garden and part of a semi-derelict house with no electricity, no running water and no drains.

Alan was right; it is the only place he can live. He is a writer whose novels are permeated by a deep sense of place. But he is also a historian, an archaeologist and champion of the heritage of Cheshire. His interaction with his acre of land has been profound.

As for me, I am the jack-of-all-trades. I’m the gardener that finds the pottery sherds and the flints and the slag, which, when identified by the experts that come here, provide the evidence that this acre has been occupied since the Mesolithic. 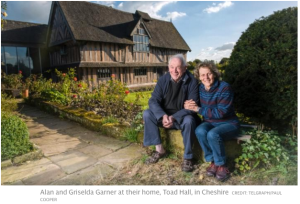 For 10,000 years people have found here a good place.  It was a sacred site over millennia.   The house stands on a prehistoric burial mound, on the edge of which we found a Bronze Age cremation, radio-carbon dated to around 1,800 BC. This site is still yielding its secrets.  And with the excitement of each new discovery comes a greater obligation to care for what is here and protect it for the future.

By 1968 Alan had written three novels: The Weirdstone of Brisingamen, The Moon of Gomrath and Elidor; all set within twelve miles of his home.  He had bought the other cottage for £110 and the house became known as Toad Hall, not due to any association withThe Wind in the Willows, but because in Cheshire dialect ‘the old’ sounds like ‘toad’.  We had electricity, two electric typewriters and a photocopier, but still no drains. The children were growing up. I was desperate for a flush lavatory, but we had no predictable income, and certainly no money for the luxury of a septic tank.

Then Granada Television commissioned Alan to adapt his fourth novel, The Owl Service which draws on the Welsh legend of Math ap Mathonwy, and is set in Wales, not Cheshire, as an eight part television series. This windfall was enough to cover the costs of extending Toad Hall and putting in a septic tank.

We knew how important Toad Hall was and how sensitive any extension would have to be.   In Michael Peach we found the right architect.  He said we should apply the traditional method of extending a timber building by recycling parts of other buildings.  A Grade II listed building eighteen miles away was about to be demolished, he told us; we could use some of that.   But the dilapidated house was so beautiful we could not be party to its destruction. So with not enough money to move the two rooms we needed, we took all ten. We dismantled, repaired and rebuilt the Old Medicine House in the garden.

The cost of restoration nearly cost us everything.  Cheshire County Council demanded repayment of a loan that they had given us having said they would commute it to a grant. When Patsy Roynon, a school friend of mine, who loved this place and believed in its importance, heard of the threat, she offered to buy a share of the building.  Its heritage was secured by the philanthropy of somebody who cared about its future.  No public body ever gave us a restoration grant.

In 2004, with Patsy, we founded The Blackden Trust to protect this ancient site. We are the guardians and interpreters of a place that is nurturing us for our lifetimes.   In order to protect its future it must be shared with people who respond to its atmosphere. Alan’s need for isolation has yielded to the aims of the Trust. Visitors now come to engage with their heritage at educational workshops and conducted tours and through the research carried out here on the archaeology and history of the area. Our reward is the commitment of the visitors and scholars and volunteers who engage with this very special place.  Over the last fifty-nine years, the heritage here has been protected, not by any action of the State, but by the philanthropy of individuals.

One thought on “Outstanding contribution to heritage: The Garners shortlisted”